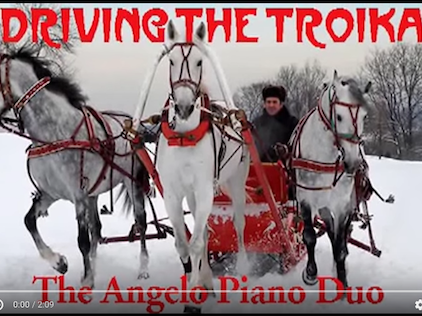 "Driving the Troika" is from a collection of 18 pieces for piano four hands, entitled "Sketches" by Russian composer, Valery Gavrilin. A well-known symbol of Russia, and a wild and exciting way to travel, the Troika is a unique 3 horse driving combination, which connects the horses to sleighs, carts, or covered wagons. The Troika ride has been recognized as the most spirited, fun, and fastest way to travel (up to 50 kilometres an hour) and the sensations that it evokes are in tune with the Russian personality and spirit.

About the composer - Valery GavrilinBorn in the northern Russian town of Vologda, Valery Gavrilin perceived folk music with his heart. "In Vologda, I had firsthand experience of life. I met people who helped me understand real beauty and kindness and the true value of life and people. My musical life started there." Then Gavrilin moved to St. Peterburg and linked his musical career with that city. A rare gift for melody made Gavrilin an excellent composer of songs. "All music has its origins in vocal music, and the human voice is its first carrier. It's hard to imagine how music could have survived the centuries if people had not had this wonderful instrument, the voice, always ready at hand. Thanks to the presence of words vocal music is easier for the general public to understand and this is crucial for me." (V. Gavrilin) The art of Gavrilin is one of the most vivid and striking features of the Soviet culture. Both the aesthetics and the style in his art are a perfect example of the neo-romantic tendencies in contemporary Russian music. 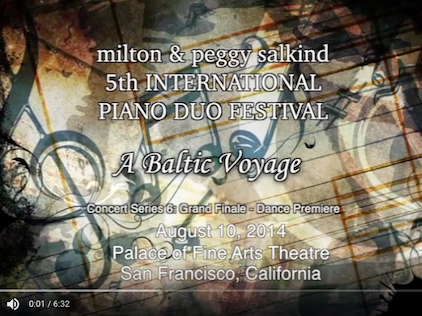 The "Pas De Deux" is from "Anyuta Ballet" by the Russian composer, Valery Gavrilin. This video is an excerpt from the "Anyuta Suite" from a live performance of the American premiere at the final concert of the 2014 Salkind International Piano Duo Festival - "A Baltic Voyage" at the Palace of Fine Arts Theatre in San Francisco. The choreography is by Tiit Helmets (San Francisco Ballet) and the score for piano duo was arranged by the distinguished Latvian pianist, Raffi Kharajanyan and performed by The Angelo Piano Duo. The principal dancers featured in the Pas de Deux are JoAnn Sundermeier (Anyuta) and Joshua Reynolds (the Student Lover) from Smuin Ballet.

Valery Gavrilin (1939 – 1999)
Russian composer, Valery Gavrilin was an Honored Artist of Russia, a People’s Artist of the USSR and a recipient of the USSR State Prize. Considered one of the last great Russian classical composers, Gavrilin was born in 1939 in Vologda. His musical life started in Vologda but flourished in St. Petersburg. Gavrilin’s life was immersed in the poetry and tragedies of Russia. He synthesized the simplicity of Russian folk songs with academic sophistication and brought more romanticism to his musical expression. While part of the broadly described Slavophile tradition, he stood alone in modern Russian music. Prominent composer, Vladimir Rubin said. “He was not like anybody else - neither in his intonation, nor in the form, nor in the outlook. He had an outstandingly bright melodic talent and a new voice, which happens so rarely.” Rubin described Gavrilin as one of the major artists in 20th-century music because, like Rachmaninoff, he was traditional and innovative at the same time. One of his three ballets, Anyuta, was written at the request of the Russian ballet stars, Yekaterina Maximova and Vladimir Vasiliev in 1982, and it became widely known in Russia from its long run at the Bolshoi Theatre in Moscow. A large portion of the music from the Anyuta Ballet has been transcribed for piano duet by the renowned Latvian pianist, Raffi Kharajanyan in a piano cycle, entitled, "Sketches." Sfmf commissioned Kharajanyan to arrange Gavrilin’s exquisite "Adagio" - the Pas de Deux from "Anyuta" for the American premiere of the "Anyuta Suite" at the 5th Salkind Festival – "A Baltic Voyage." 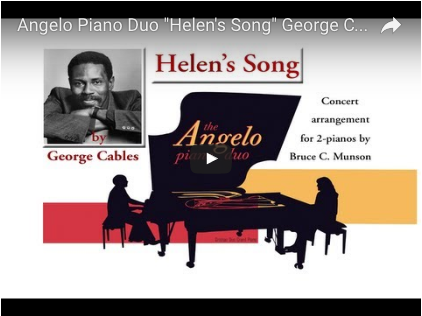 "Helen's Song" video is dedicated to our dearest friend, Helen Wray. Helen was George Cables' soul mate and she was the inspiration for his classic jazz standard Helen's Song. The 2 piano Concert arrangement was written for the Angelo Piano Duo by Bruce Cameron Munson. This video features an excerpt of the original piano solo version by George Cables followed by performances of the Concert arrangement from the Salkind International Piano Duo Festivals. 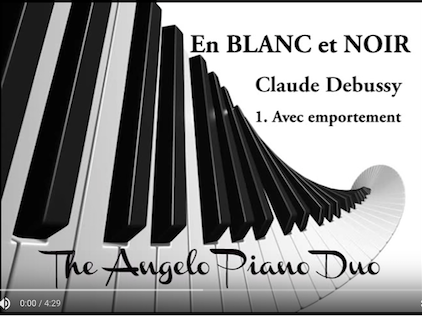 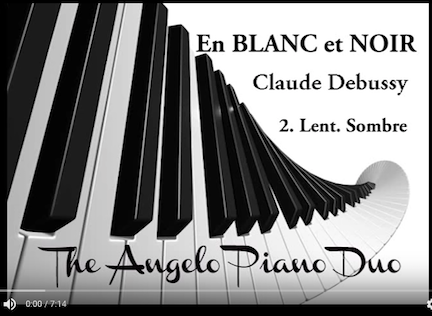